At present, there are more than 200 vaccines against covid-19, of which 21 have already been authorised for administration in different countries. In Europe there are currently four (Pfizer’s, Moderna’s, Janssen’s, and AstraZeneca-Oxford’s), while in the United States there are currently three, the same as in Europe except for the Oxford one.

In Latin America, the distribution is somewhat more diverse: Pfizer’s and AstraZeneca-Oxford’s vaccines have been approved in at least ten states, including Mexico, Colombia, Costa Rica and Brazil, while Janssen’s is only approved in Colombia, and Moderna’s is not yet approved in any country in the region. However, Sputnik V does have a stronger presence, having already been approved in more than five countries in the region (including Mexico and Venezuela), as well as Sinovac, which has already been authorised for the moment in Mexico, Argentina, Chile, Colombia and Uruguay

Despite the technology used by the vaccines varies from one to another, all of them have the goal to cheat the immune system by means of the inoculation of a compound simulating an infection: in this case, the one causing covid-19.

Sometimes, this compound contains the full coronavirus; in others, only some part. Here we explain the different strategies used in the diverse vaccines, and of which type is each of them.

These vaccines inoculate the full virus, but are designed to avoid the progression of the disease. In this category we find the virus-inactivated (dead) vaccine or the live attenuated (weakened virus) ones.

Inactive-virus vaccines work by inoculating the virus causing the disease -in this case, the SARS-CoV-2- but a non-infectious variant (dead), making impossible the progression of the disease. As a light version of the virus, the immunity generated in the body is also light, so these vaccines require booster doses and immunological adjuvants.

Examples of inactivated-virus vaccines are those two developed by the pharmaceutical company Sinopharm, Coronavac (Sinovac), and Covaxin (Bharat Biotech).

These are vaccines containing the genetic material that carries the information needed to produce the spike (S) protein of coronavirus, but using a harmless type of a different virus —the so-called viral vector by scientists—, as a vehicle to make this information carry to the cells.

Once the vaccine is injected, the viral vector travels through in our body carrying in its DNA the bad virus —for this case the SARS-CoV-2—that will make our cells produce many copies of mRNA. This mRNA will instruct the fabrication of particles S, that once detected by our organism will trigger an immune response.

AstraZeneca-Oxford’s has been the first vaccine using a viral vector approved against covid-19, but Janssen/Johnson & Johnson, Gamelaya Institute’s Sputnik V, and CanSino have already arrived in some countries. In most of them they use adenoviruses —a virus group causing the common cold— as vectors or carriers. Before these other vaccines based on viral vectors have been used against Ebola or Zika.

These are vaccines with a technology based on directly inoculating genetic material with which the cells can make the viral proteins causing the disease to face the infection. In this classification one finds the RNA and DNA vaccines.

The first vaccines contain messenger RNA, which carries the information needed for the cell to produce the viral protein causing the disease that one pretends to fight against. For SARS-CoV-2, the mRNA contains information to build the spike or S proteins, found at the corona on the surface of the SARS-CoV-2.

This mRNA travels inside a lipid envelope that avoids being destroyed by our organism thus arriving at the cells, where the genetic material is read to start building the protein, which is then recognized by the immune system as an alien element. This triggers the immune response, with the development of antibodies and T lymphocytes.

So far, the approved vaccines using this technology are those from Moderna and Pfizer/BioNTech, but there are others, such as CVnCoV (GSK), which is at an advanced stage of study.

A different type of vaccine is that of DNA, which has to reach the nucleus of the cells with the genetic information to produce the mRNA responsible for the synthesis of the proteins. The reality is that these vaccines do not usually trigger a sufficiently strong immune response because the amount of DNA that achieves the nucleus is very small, but there is at least one laboratory, the pharmaceutical company Inovio, with its INO-480 vaccines, which has embarked on this type of development.

These vaccines inoculate only specific parts of the virus, as its proteins or carbohydrates, previously fabricated in other external cells.

For SARS-CoV-2, the spike protein is usually externally synthesised. After the inoculation of these vaccines, the body learns to recognise it, triggering an immune response protecting the organism against future infections.

Examples of these vaccines are those from Sanofi/GSK and Novavax, the russian EpiVacCorona, and the chinese ZF2001. It is not the first time these vaccines are used to fight diseases: we have seen them for hepatitis B or for papillomavirus, and in most of the vaccines from the vaccination calendars for children (tetanus, diphtheria, ...).

The main advantage is that these vaccines are safe and cheap to produce, but they usually need adjuvants or immune response amplifiers, as well as several doses to achieve an adequate immune response. 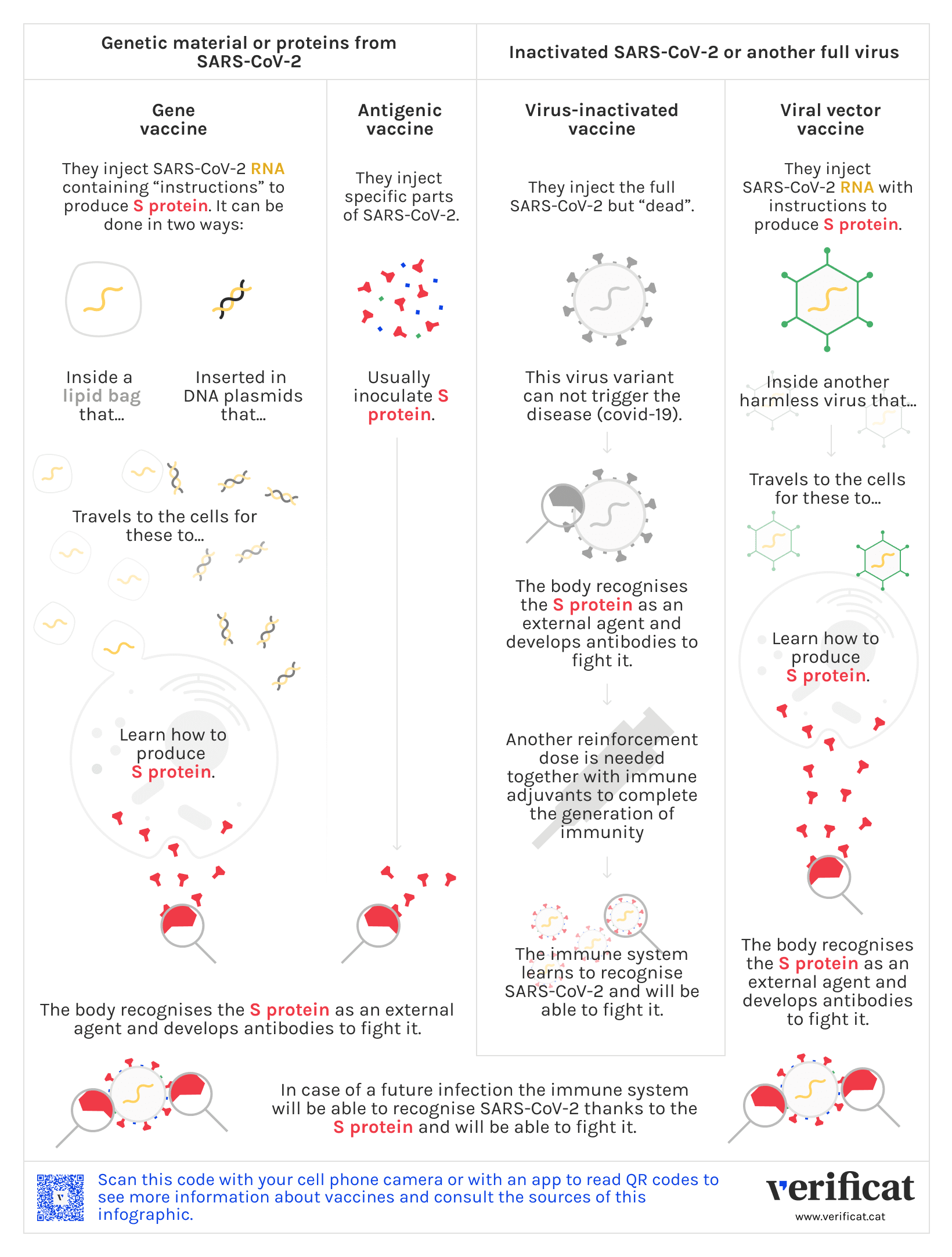