A video is circulating on social media these days in which Tal Zaks, medical director of Moderna, can be seen giving a TED talk in 2017 in which he explains how messenger RNA vaccines work. Accompanying this video there is a message claiming that Moderna’s medical director acknowledges in the speech that vaccines modify “your genetic code”. This is FALSE: neither do mRNA vaccines modify your genetic code, nor has Zaks made such a claim.

Since March 2021, a post has been circulating and has gone viral claiming that Zaks, in a talk called "Rewriting the genetic code: a cure for cancer in the making", allegedly acknowledges that messenger RNA vaccines are capable of changing the genetic code. During the talk, which lasts about eleven minutes, the expert discusses how such vaccines would work and their possible applications in the future. At one point, the speaker states that "if we could change what we call the software of life, if we could insert a line of code or change it, it would have profound implications, from influenza to cancer". This part of the speech has been misinterpreted or taken out of context, claiming that what Zaks is saying is that these vaccines have the potential to change the genetic code, when in fact he was referring not to the genetic code of DNA, but of mRNA.

These types of vaccines do not modify the genetic code of the recipient, as we have explained. mRNA vials, such as those of Pfizer and Moderna, are made of a piece of the coronavirus genetic code, which is incorporated into a lipid capsule that transports it into the cells. There, it triggers an immune response in the body that, at the moment of entering in touch with SARS-CoV-2, can fight it off and thus prevent the most severe forms of the disease. However, as the web of the Vaccine Alliance (GAVI) points out, these vaccines are not able to alter our DNA because, first, "RNA is not the same as DNA", and because this RNA "cannot combine with our DNA to change our genetic code". Moreover, RNA "is very fragile (hence it needs to be transported by these fat nanoparticles into the cell), and will remain inside the cell for 72 hours before it degrades".

DNA is placed in the nucleus of cells, a place where mRNA can not access. What Moderna is investigating, according to what they explain in their website and explained by Zaks in his talk, is a technique to identify the genetic mutation of cancer cells in patients with a tumour in order to design an individualised vaccine, so that each person can develop immunity to their own cancer.

It is not the first time that this hoax has been disproved. Previously, verification agencies belonging to the International Fact-Checking Network, such as Agence France-Presse, Reuters or Newtral,, have published articles addressing the issue of Moderna's medical director's talk and his statements taken out of context. 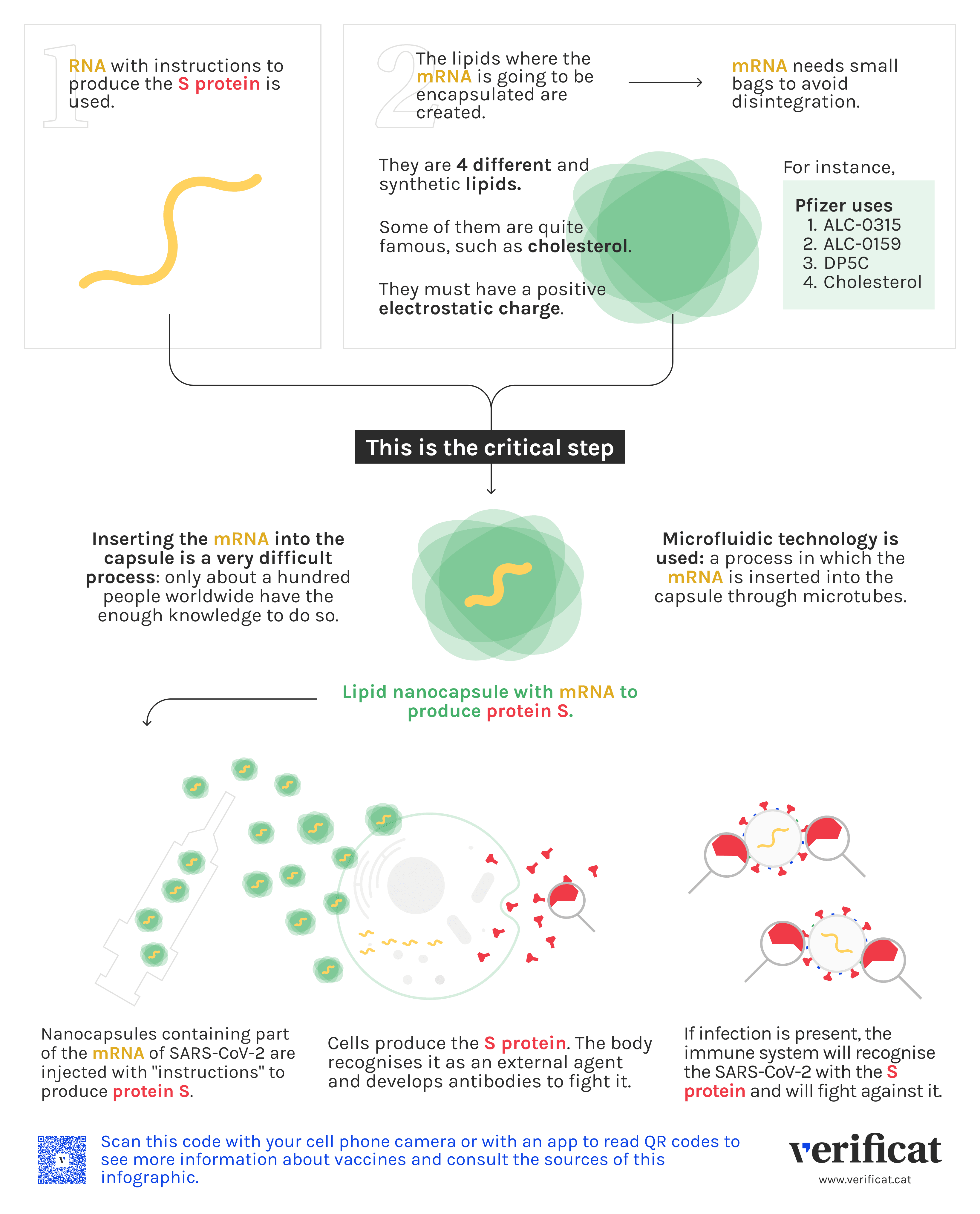