You have sent us a video analysing the alleged effect of vaccination on covid-19 mortality worldwide, together with a screenshot of the particular case of Spain. In the video it is shown how the number of deaths by covid-19 started increasing at the end of December 2020, coinciding with the beginning of the vaccination campaign. The video is MISLEADING. This coincidence is real, but the images try to link two variables that are not directly related. Deaths registered during the first vaccination stage depend on epidemiological circumstances such as the relaxation of mobility during the Christmas period. In fact, when mortality was stabilised in April, the immunisation rhythm was three-fold higher than in January. 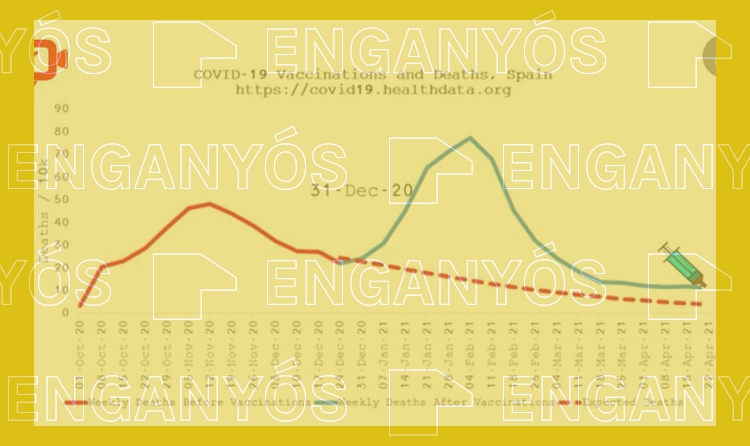 Correlation does not imply causality

It is true that the change in Spain's death tendency (about 25 in December) practically coincided with the beginning of the vaccination campaign (on the 27th of December 2020). However, “correlation has not always to do with causality”. Marc Sáez, statistician and epidemiologist at the University of Girona, warns Verificat. "In this case, it is simply a case of two variables that have similar behaviour over a period of time," he ensures.

The vaccination campaign has been increasing its intensity in a progressive manner and started with the older and more vulnerable groups to SARS-CoV-2 infection. According to data from the Ministry of Health, up to early March the number of administered vaccines in Spain did not reach the 100,000 daily doses, while during the last week of April ended close to 300,000. That is, between January and February, with the mortality rate reaching 589 deaths in one day, the vaccination rhythm was three-fold lower than when the situation was already stabilised under 100 daily deaths.

In fact, the effect of vaccines has become apparent over time. For instance, for the specific case of nursing homes, mortality was reduced by 99,7% by April, as we explained in an article.

Vaccines did play a leading role in the fourth wave, according to the expert from University of Girona. The epidemiological situation experienced in Easter remembers the Christmas pattern: before Eastern, restrictions were relaxed and social contact increased. However, the fourth wave was much smaller than the third one. “The most important reason for this difference is vaccination”, according to the statistician, although this time "the increased mobility did not represent as many contacts as in the third wave". By 31 March, more than 5 million people had been vaccinated with at least one dose (13.2% of the population to be vaccinated).

Relating two variables that coincide in time but that don’t have a causal relation is a very usual way of manipulating data. It is like saying, for example, than "in Europe more children are born in spring than during the rest of the year; and in spring the storks come: therefore, the storks bring the children", as Mark Sáez ironises, who explains there are other examples of variables that evolve in parallel but that are independent between them. From Verificat we have already denied information circulating in different formats and which fallaciously relate vaccination against influenza with deaths caused by covid-19.

The video, which cites as a data source the website Health Data, shows an alleged evidence of deaths arriving to 80 weekly fatalities per 10,000 inhabitants in the week of 4 February in Spain. However, all the numbers shown in the image are multiplied by 100 with respect to those offered both by the website and by the Government. That is, the third wave mortality peak occurred during the week indicated by the video, but the weekly death numbers were much lower: 0.8 per 10,000 inhabitants.

In fact, throughout the pandemic, 80,099 deaths have been registered in Spain (with data from 3 June), which means a total of 17 per 10,000 inhabitants, a number well below the 80 deaths per week mentioned in the video.